This week sees the start of a resistivity survey of the Abbey Grounds, Cirencester. The first days work extended over much of the excavated area of the Abbey and some areas immediately to the north.

The survey today covered an area to the east of the Abbey buildings. Large apparently ditched enclosures appeared in the east of the survey.  Do these correspond to the enclosures in the middle distance on the Kip drawing? The modern and medieval lines of the culverted Gunstall Brook can be seen in the centre of the area, with a possible building immediately outside the line of the culvert, but parallel to it.

Today’s survey included buildings to the NE of the cloister, with the probable culverted Gunstall Brook running below them.  To the east, running from the SE corner of the survey towards the bandstand is an unexpectedly prominent set of features dividing the area of the Abbey from the wetter alluvium to the east. Is this a ditched boundary or a former natural channel?

Some poor quality data from near the bandstand will probably need replacing in due course, but otherwise another  very productive day!

A very wet day, but good progress was made. There are a couple of patches of poor data, but otherwise the weather didn’t affect things too much.  The survey included much of the central pathway shown on the Kip drawing, passing through the various enclosures and over the various ditches/stream towards the icehouse, with the modern bench by the lake (the small gap in the data) right on its line.

A minor surveying glitch meant the day had a slow start. One of the fixed probe markers had also been removed by a dog overnight, but a reasonable data match between days was still obtained. There now appears to be a second old stream channel just west of the edge of the modern lake. The impression of a series of land divisions (fields/gardens?) crossing the old valley floor is increased. Although some of these figure on Kip’s engravings, they may have a much older origin.

Thank you to all those who have contributed to the survey this week. I’m looking forward to getting the whole picture next week!

The northern part of the area west of the lake was surveyed today.  although much of the area was of very low resistivity further narrow linear positive anomalies (similar to some seen just to the SE) suggest small walled(?) enclosures. Close to the modern lake is what appears to be a small building and another may underlie the road down to the Norman Arch. The slightly sinuous palaeochannel can be seen to diverge southwards from the modern lake.

The survey focused on the southern edge of the grounds today. Much of the area shows a rather strong influence from the trees,  but there is still a lot of interest in the data.

Thanks to everyone who has taken part in the survey over the last 10 days. The interpretation will follow over the coming weeks.

The images below show the data as a standard greyscale image (with black=10ohm to white= 90ohm measured resistance) and as a high-pass filtered image (black=-15ohm to white= +15ohm to emphasise the anomalies) collected so far.  This area includes parts of the Abbey in the southwest, together with various other structures of the Abbey period and later, as well as the post-medieval formal gardens. 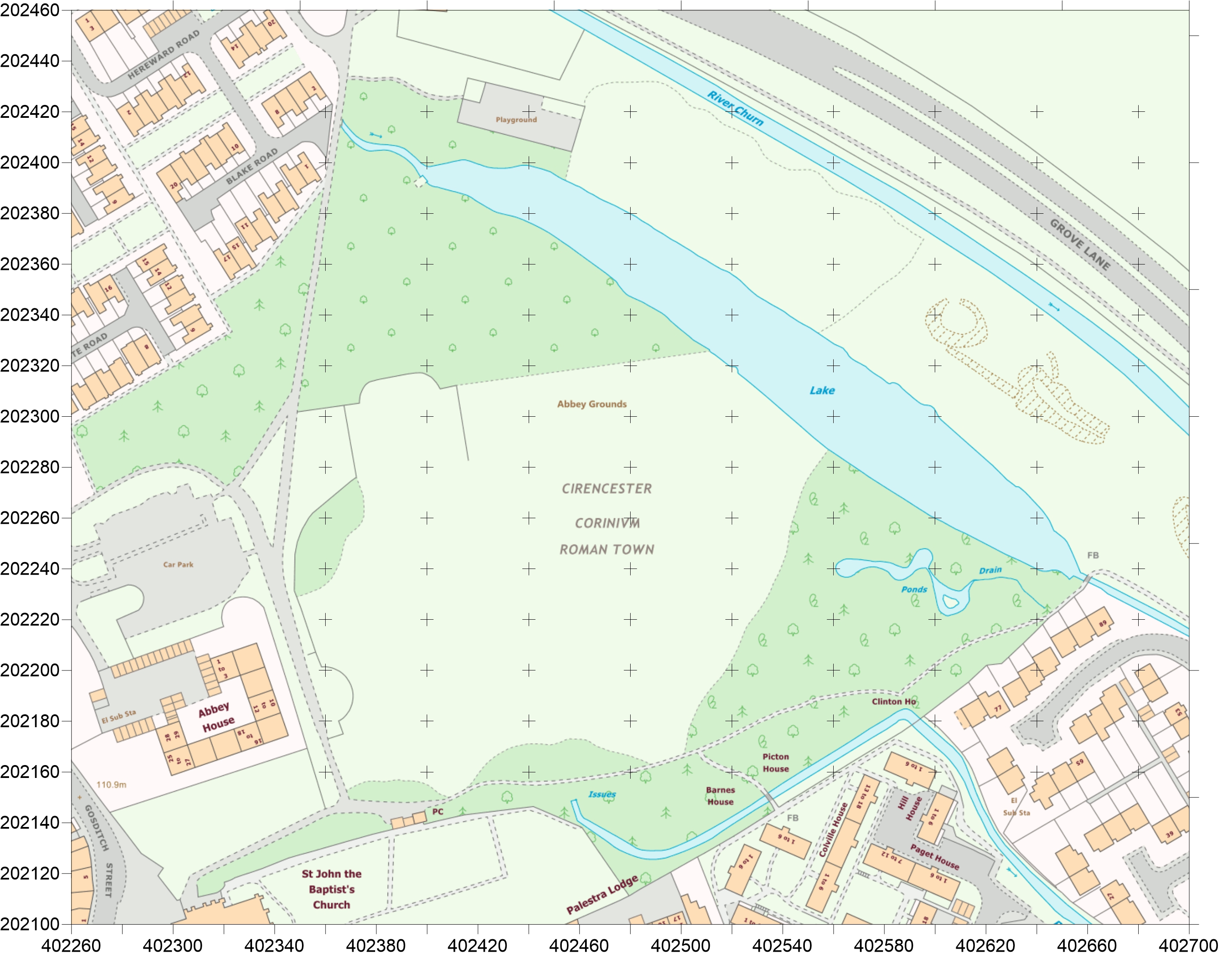 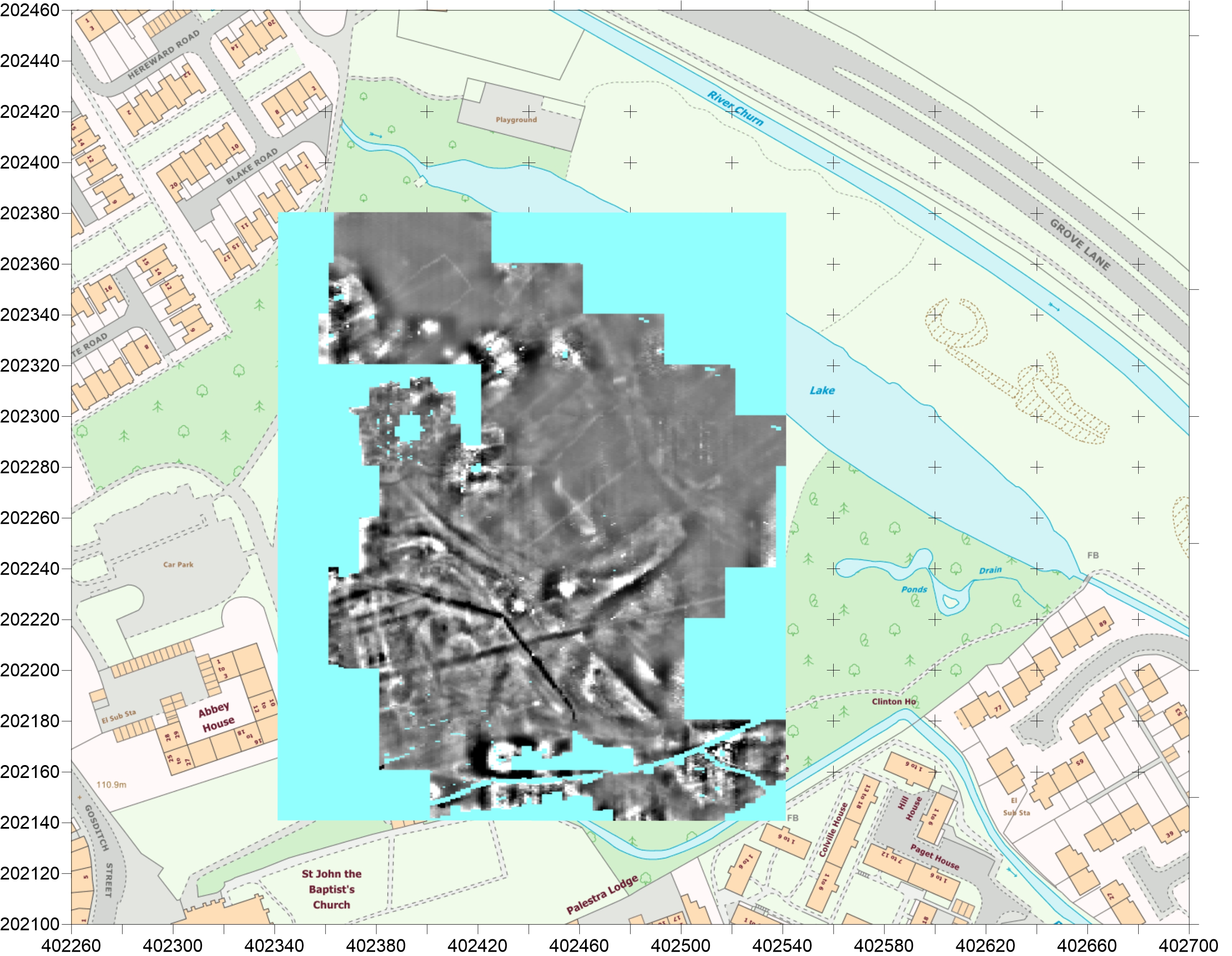 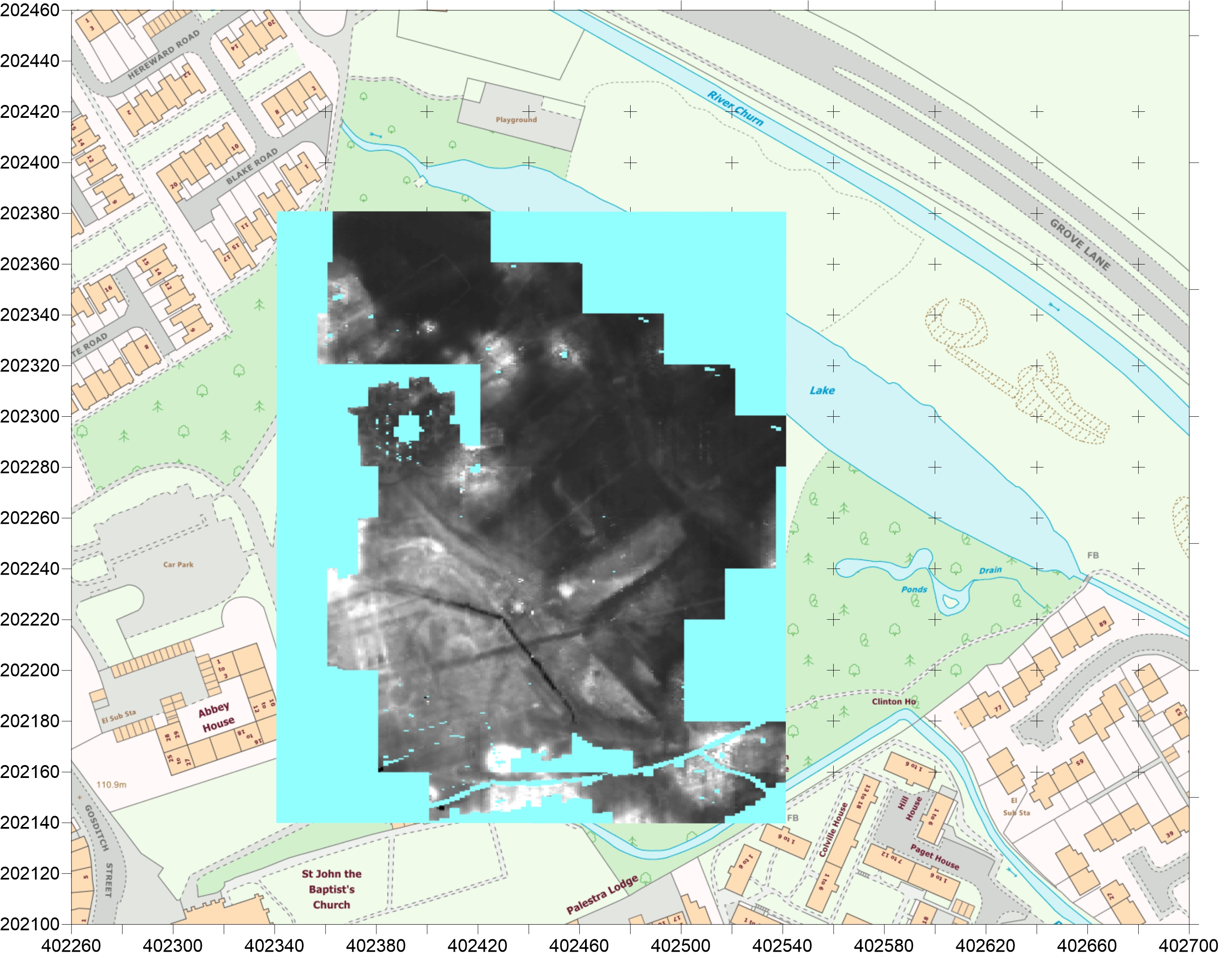 The report on the 2017 survey was completed in March,  but was publicly launched last night (31/7/18) with a talk and walk as part of ‘Love Parks Week’.  The report has now been made available in the GeoArch report library. It is report #496 in the library, which can be accessed at: http://www.geoarch.co.uk/report library/ or directly here.