A watching brief, undertaken for Caerphilly County Borough Council, at an extension to Gelligaer cemetery about 150m NE of the second Roman fort, Gelligaer II, produced a rather elegant and unusual smithing hearth . The hearth was associated with a small drainage gully and a couple of post-holes. The feature comprised two hollows, linked by a worn central section into an elongate figure-of-eight shape. One bowl, approximately 700mm in diameter, formed the anvil base. This contained two large slabs of local stone. It was unclear whether these were used directly as an anvil (their surfaces showed no damage), or whether they were packing for supporting or levelling a wooden anvil block. However it was used, this bowl contained a large quantity of hammerscale. 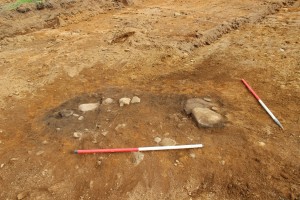 View of the smithing hearth from the SW before excavation; anvil to right, hearth to left. 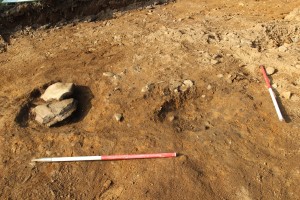 View of the smithing hearth from the NE before excavation; anvil to left, hearth to right.

The other, northwestern, bowl (650mm in diameter) formed the truncated remains of the hearth itself and lay 400mm away from the anvil base. The hearth contained abundant charcoal (almost entirely of oak) and 2.4kg of slag, including two complete, large smithing hearth cakes of approximately 900g each.

A piece of  small diameter branchwood charcoal was selected for radiocarbon dating – and it returned a date, which was not Roman, but cal. AD 610-670. This is an outstanding result, because it represents the first  direct evidence for 7th century occupation at Gelligaer itself. Interestingly, a structurally very similar hearth was recorded in the 1970s near Pontarddulais (50km west of Gelligaer) – and it gave a similar date of cal. AD 410-660.

Gelligaer is a large upland parish, centred on the village with its two Roman forts, medieval church and motte.  In the early medieval period it was the centre of the commote of Uwch Caiach, part of the cantref of Senghenydd, in turn part of the Kingdom of Glywyseg, later known as Morgannwg. The motte may be the Castrum Cadwallon, held by the English crown in 1194 and possibly previously the home of Ifor ap Meurig (Ifor Bach; 1100-1170), Lord of Senghenydd and his son Cadwallon.

Gelligaer is reputed, in some accounts, to have been the birthplace of St Cattwg, a 6th century saint, whose parents are supposed to have been Gwynllyw (ruler of Gwynllŵg (Wentloog), the lowland area west of the Usk around Newport) and Gwladys (daughter of the Irish King Brychan of Brycheiniog). Both parents, so the stories tell, later became hermits and St Gwladys is commemorated by a small  medieval chapel on the hills immediately north of Gelligaer. These largely mythological characters formed a part of the foundation stories of the early medieval kingdoms and monasteries. The 6th-7th centuries are represented in the archaeological record of Gelligaer by inscribed stones, one on the Roman road north of Gelligaer, inscribed TEFROIHI, TEFSOIHI or NEFROIHI, and one to the northeast at Brithdir, inscribed TEGERNACUS FILIUS MARTI HIC IACIT.  These inscriptions give a glimpse into the world inhabited by the early saints, the world also of the smith who used the hearth at Gelligaer.