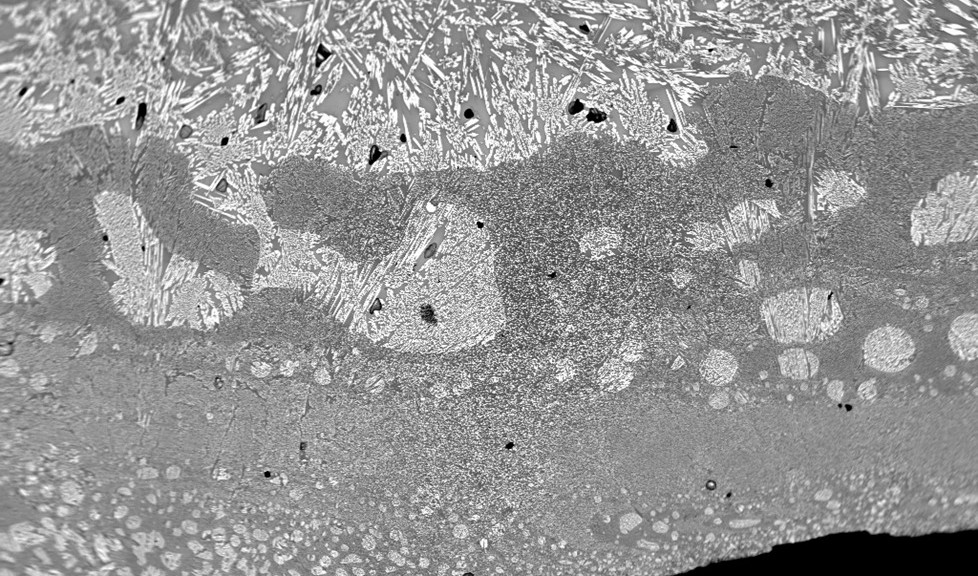 The origin of 'wolfram', the alternative name for tungsten (retained in chemistry through the use of the symbol W for tungsten), was because the tungsten-bearing minerals were held in medieval times to devour tin during tin smelting. Rich deposits of tungsten occur in the Hemerdon Bal Mine in Devon (the 4th largest deposit known in the world), on the edge of Darmoor, and currently being reopened as the Drakelands Mine. The wolframite of the deposit has a similar colour and density to cassiterite, the tin ore mineral once widely exploited around Dartmoor. The medieval tin smelting site at Brownie Cross lies 4km NW of Hemerdon Bal. It was discovered and excavated by Cornwall Council’s Historic Environment Service, Projects team, which had been commissioned by South West Water to undertake a programme of archaeological investigations along the route of the 13.5km-long Avon Water Main Renewal Project in April and May 2009.   Radiocarbon dates indicate activity within the late 13th or early 14th centuries and the site is interpreted as a manually blown 'blowing house'. The slag from Brownie Cross is mainly in the form of fragments of thin sheets, probably scraped from the surface of the tin in the float. Some slag samples are comparable with tin slags described previously from SW England, but most show elevated concentrations of both tin and tungsten. These slags bear inclusions (particularly close to the sheet bases) of tungsten metal, tin oxides, wolframite and hard head (tin-iron intermetallics). The body of the high-W slags are glass with an Fe-Mn-Mg tungstate, outside the recorded compositional range of natural wolframite. The most highly tungsten-enriched slags also commonly show a relict emulsion texture, with the tungsten rich component showing extreme enrichment of tin with respect to silica, reflecting the low yield observed by the german medieval smelters which led them to use the name 'wolf rahm' meaning wolf's spit or foam. 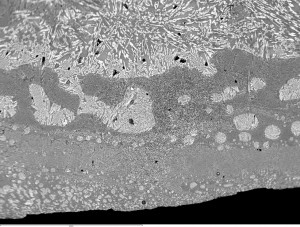 BSEM image of highly tungsten-enriched tin slag from Brownie Cross. Variation in the size and density of the Fe-Mn-Mg tungstate crystals reveals the texture of an emulsion of slags differing tungsten enrichment. Field of view 4.5mm. 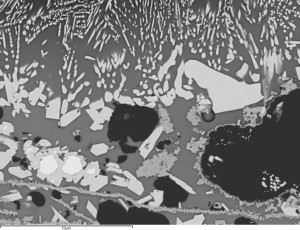 BSEM image of the basal part of a slag sheet, showing film-like development of tin oxide (mid grey), tungsten spheroids (white) overgrown by Fe-tungstates. The body of the slag above has elongate Fe-Mn-Mg tungstates in a tin- and tungsten-rich glass . Field of view 160 microns.